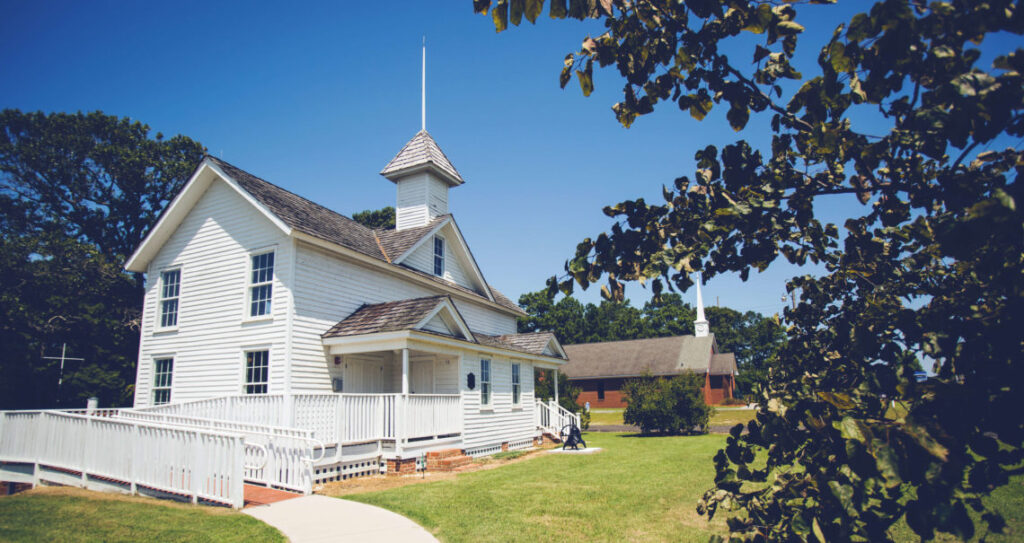 In a perfectly preserved, century-old clapboard building not far from the Currituck Sound, the Historic Jarvisburg Colored School’s rich history and stories are protected for generations to come.

Angerona Saunders grew up hearing her older brothers and sisters tell stories about attending Jarvisburg Colored School. The children walked six miles from their home to the classroom; learned the basics of reading, writing, and arithmetic; participated in baseball games at recess; and ate hot lunches before walking six miles back home.

Saunders, who serves on the board of the Historic Jarvisburg Colored School Association, wants to ensure that those stories — and the essential role the school played in Currituck County history — continue to be shared.

“The school is important because it’s part of the history of how we grew up,” Saunders says. “It’s a history that many of our local folks don’t know anything about.”

In 1868, African American farmer William Hunt deeded one acre of land for the construction of Jarvisburg Colored School; it was the first school for African American students in Currituck County. Elementary school students attended school for four months out of the year. At the height of enrollment, more than 100 students were enrolled at the school. 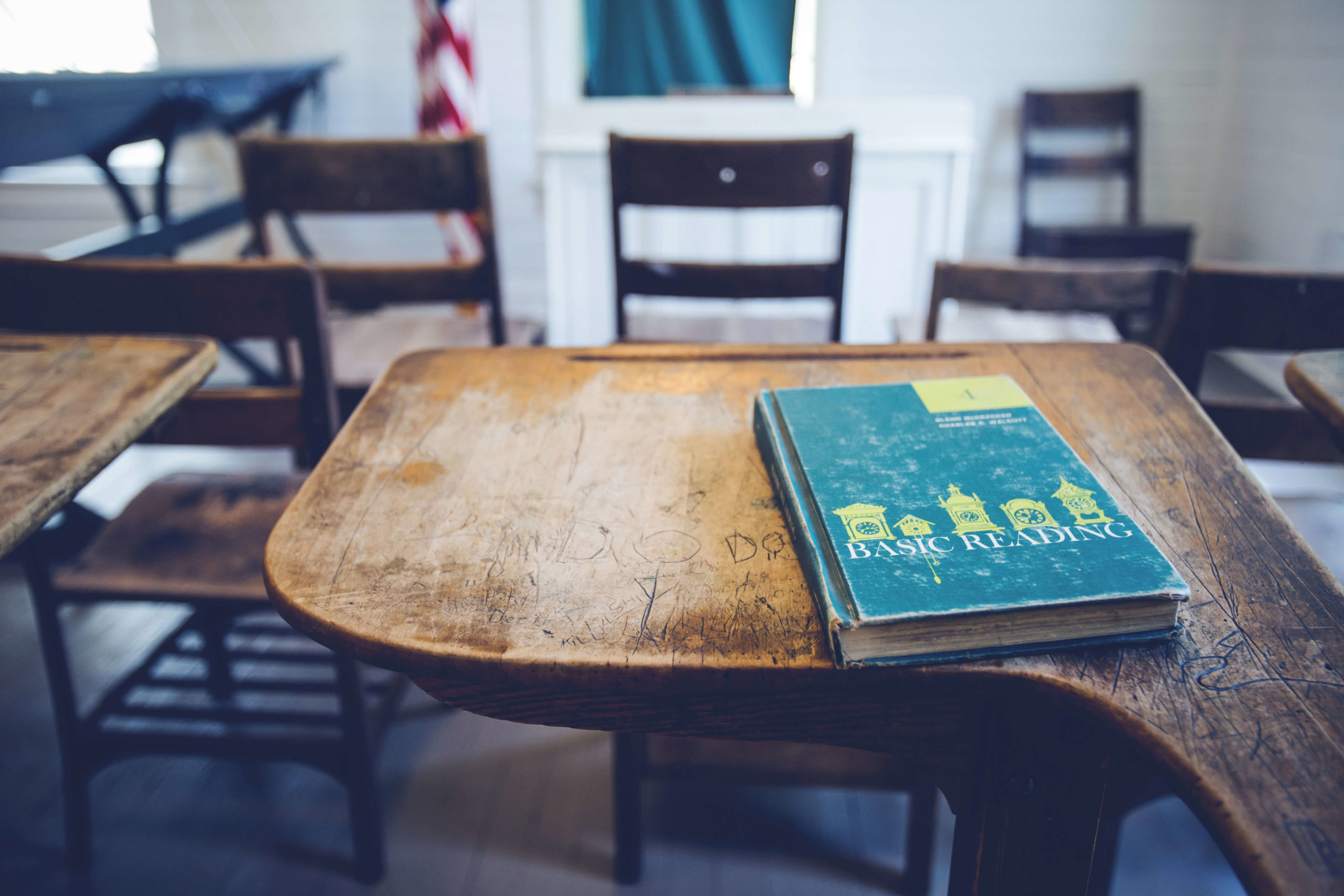 At the height of enrollment, more than 100 students learned the basics of reading, writing, and arithmetic.PHOTOGRAPH BY CURRITUCK COUNTY DEPARTMENT OF TRAVEL AND TOURISM

Like other schools for African American students, Jarvisburg Colored School was built beside a church and the local congregation provided support to the schools. Almeta Hare, one of three Black teachers charged with educating 90 students who attended the school in the 1940s, recalled teaching lessons with books provided by the state along with those donated by the local community to a school library that grew to include 500 books. Her written recollection is part of an exhibit at the school turned museum.

By 1887, Jarvisburg Colored School was one of 13 public schools for African American students in the county. A larger school was built (and later expanded) to replace the original school to educate an ever-increasing number of students. The school remained a cornerstone of African American education in the county for decades.

Leon Saunders (a distant relative of Saunders) also serves on the board of the Historic Jarvisburg Colored School Association. His parents both attended the school.

“At that time, it was the only school they could go to,” he says.

The Currituck Union School opened in 1950 and African American students in grades one through 12 transitioned from several smaller schools into one consolidated school.

“The Community Has Not Forgotten”

The historic schoolhouse now serves as a museum. The community, including church and civic leaders, local government and state preservation officials, worked together to develop plans and secure funding to restore the dilapidated building and turn it into a museum.

Half of the original Jarvisburg Colored School is set up as a classroom; the kitchen where teachers prepared hot lunches with foods donated by local farmers is tucked into an alcove at the front of the building; and the original potbellied stove that warmed the one-room schoolhouse on chilly days is still the centerpiece of the space.

The rest of the building is dedicated to showcasing small but powerful exhibits highlighting the history of the Jarvisburg Colored School and the important role it played in the lives of African American families in Currituck County. In addition to school texts, tests, report cards, and photos, the exhibits include video interviews with students and teachers sharing their memories of the historic school. 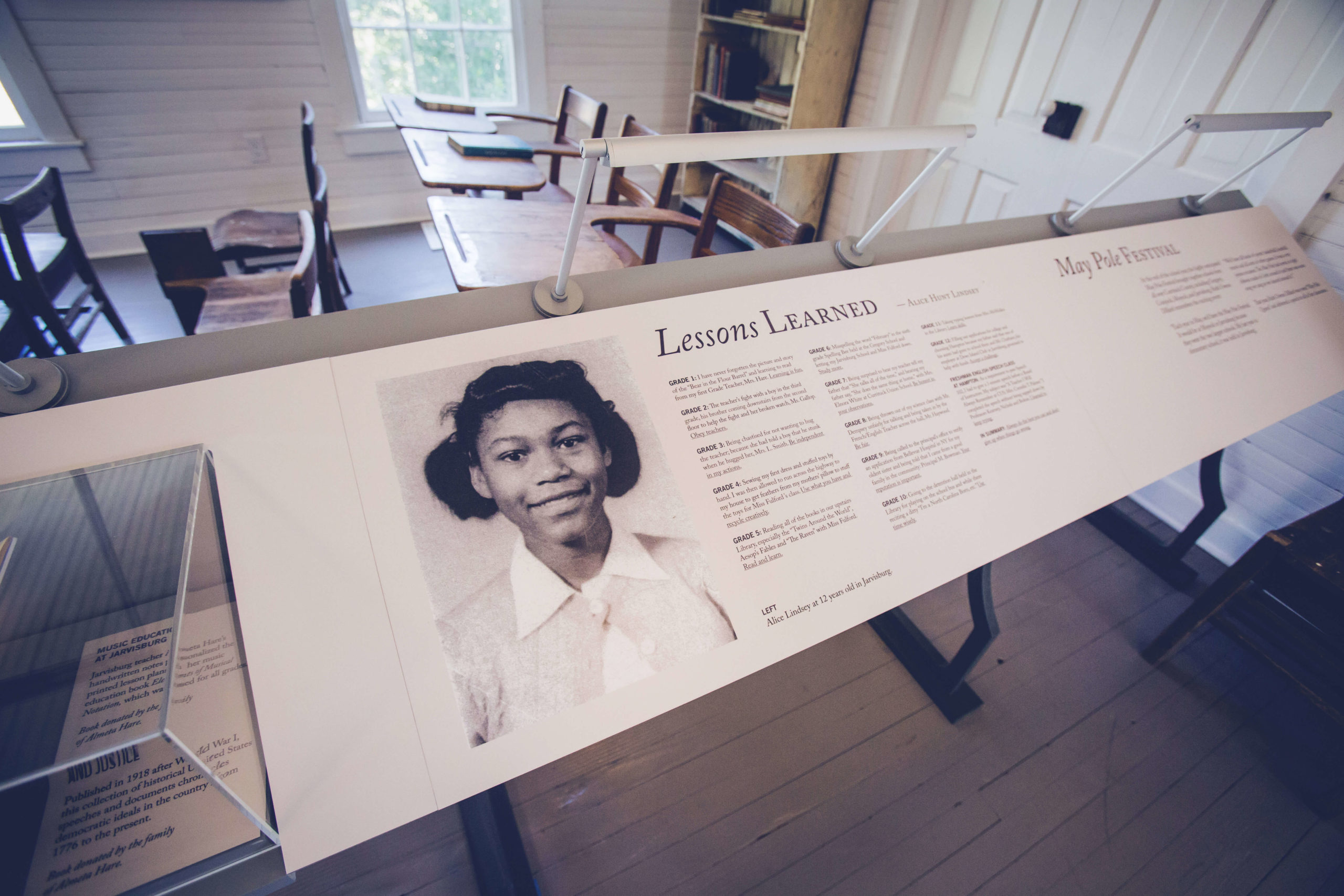 Half of the original Jarvisburg Colored School is set up as a classroom and the rest of the building is dedicated to showcasing small but powerful exhibits.PHOTOGRAPH BY CURRITUCK COUNTY DEPARTMENT OF TRAVEL AND TOURISM

As part of her recorded interview, Ruth Owens Dillard, who started attending Jarvisburg Colored School in 1936, recalled waking up early to do chores before walking three miles to school. Dillard, like other students who attended the school, often missed classes when her help was needed on the farm; the school also closed for two weeks to allow students to harvest cotton crops.

Other students, including Lena LaVerne Hunt Simons-Clyde, shared fond memories of their teachers. In her video interview, Simons-Clyde shared, “I had several beautiful teachers who seemed to want to help the children to be something in life.”

Integration further altered the educational landscape in northeastern North Carolina and beyond.

The Currituck School Board approved the Freedom of Choice School Plan, and county schools began integrating in 1966. The Jarvisburg Colored School and other segregated schools closed or integrated, and an important chapter in Currituck County history was at risk of being lost.

Leon Saunders believes turning the school into a museum is not only important for Currituck County residents with ties to the school but for the larger community too.

“Some people don’t know about the struggles that African Americans went through during that time to get an education,” he says. In 2009, the Jarvisburg Colored School was added to the National Register of Historic Places, and in 2014, nearly 150 years after the school was first built, it opened to the public as a museum. Today, the historic school hosts school field trips and welcomes the community to learn more about the school. It’s also open to the public on Wednesdays, Thursdays, and Saturdays from 10 a.m. to 3 p.m. Admission is free. 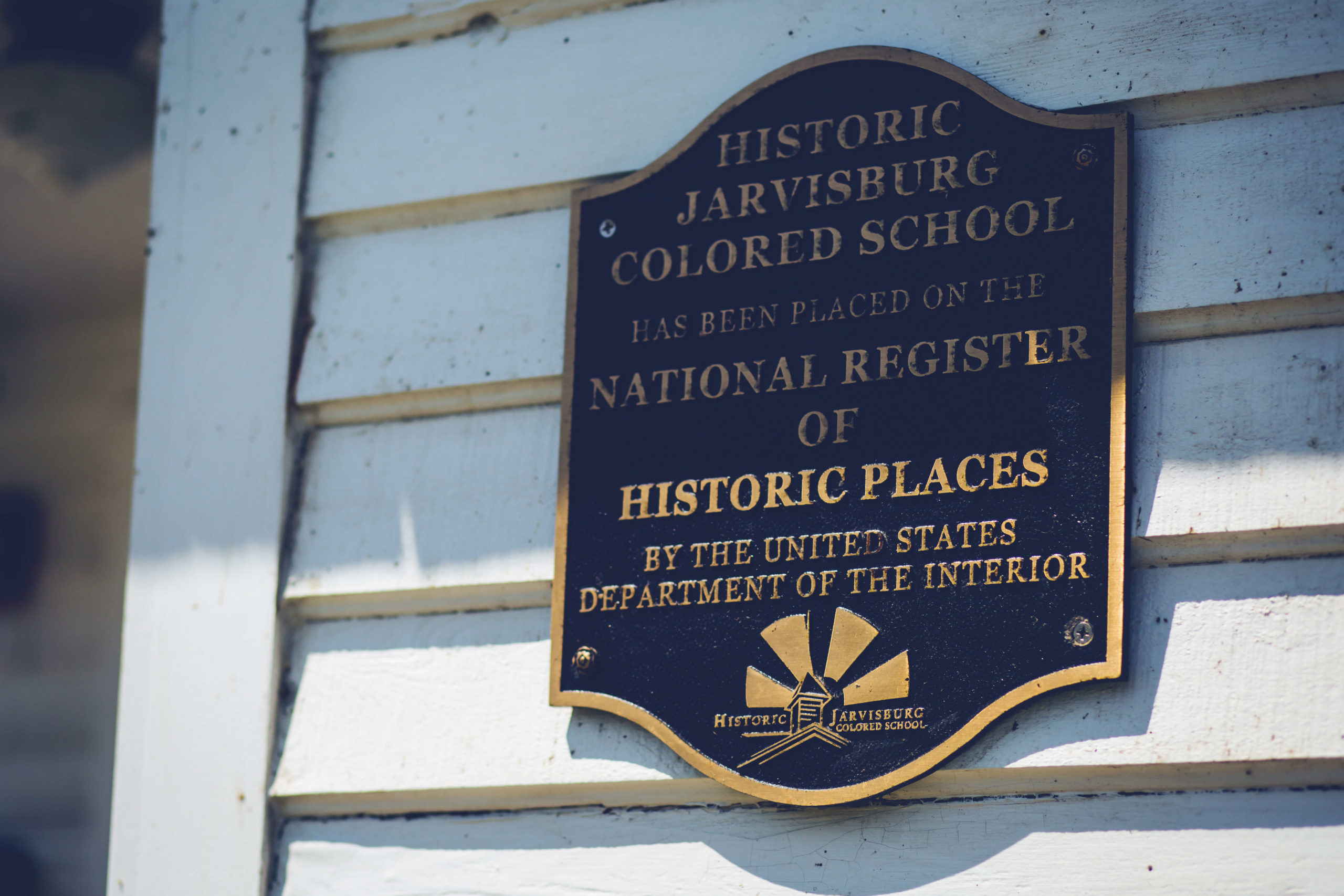 In 2009, the Jarvisburg Colored School was added to the National Register of Historic Places.PHOTOGRAPH BY CURRITUCK COUNTY DEPARTMENT OF TRAVEL AND TOURISM

A panel in the museum sums up what Angerona Saunders hopes that visitors remember about their visit: It reads, in part, “Decades after the last teacher finished the last lesson, a restored Jarvisburg Colored School commemorates the aspirations of self-reliant, hopeful people determined to survive and thrive in changing, often turbulent times. The community has not forgotten.”

The Historic Jarvisburg Colored School is one of many historical sites that will comprise the African American Experience of Northeast North Carolina, launching in June 2021. 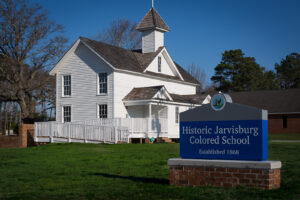 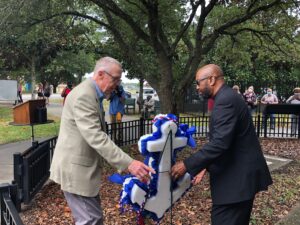