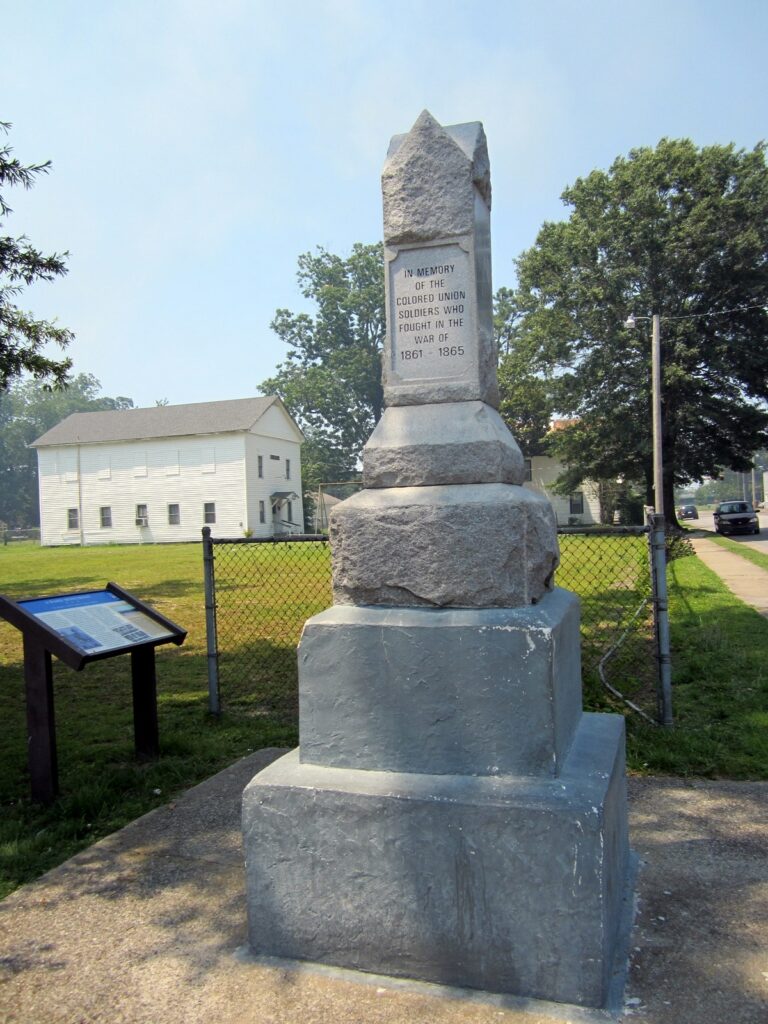 A rectangular stone marker sits atop a concrete base. It has a pointed top and is engraved with text on two sides with the inscription “IN MEMORY OF THE COLORED UNION SOLDIERS WHO FOUGHT IN THE WAR OF 1861-1865.” The marker is accompanied by a North Carolina Civil War Trails marker and informational placard.

Informational placard provided by North Carolina Civil War Trails:
“News of the bombardment of Fort Sumter inspired many African American men to rnlist in the U.S. armed forces, but federal law prohibited their service. Frederick Douglass and other black leaders urged changes to allow black enlistments. By mid-1862, as the numbers of white volunteers diminished, the needs of the U.S. Army grew, and the announcement of the Emancipation Proclamation, became imminent, more voices called for black recruitment. The Proclamation, issued on January 1, 1863, formally authorized African American military service. By the end of the war, about 180,000 blacks – including some from Perquimans County – had borne arms in the U.S. Army (almost 10 percent of total enlistments) and about 19,000 had served in the U.S. Navy.

To remember the county’s African American Union soldiers, women of the black community, many of them the wives and widows of those men, erected one of the few such monuments in the nation on Academy Green in 1910. Coordinated by First Baptist Church and the United Daughters of Union Veterans, the monument is inscribed “In Memory of the Colored Union Soldiers Who Fought in the War of 1861-1865.” Academy Green was the location of the county’s first black school, library, and church (present-day First Baptist Church), which freed-men formed in a bush shelter in 1866. The congregation later built a church across the street.

They Answered the Call
Three of the men whom this mounument commemorates are buried in Perquimans County. Sgt. John Gordon served in Co. A, 1st U.S.C.T., organized in Washington, D.C., in May-June 1863. The regiment fought in Virginia (Wilson’s Wharf, The Crater, New Market Heights) and North Carolina (Fort Fisher). It also participated in Gen. Edward A. Wild’s eastern N.C. expedition in Dec. 1863 and burned a Confederate camp near Hertford. It mustered out on Sept. 29, 1865. Pvt. John Sharp enlisted in Co. B. 37th U.S.C.T. at age 19 on Jan. 21, 1864, in Plymouth, N.C. His regiment fought at New Market Heights and Fort Fisher and mustered out on Feb. 11, 1867. Pvt. Arthur Mixon served oinCo. G, 40th U.S.C.T., organized in Aug. 1864 in Tennessee, where it guarded railroads and bridges. It mustered out in Oct. 1865.”

Back to Experience
The Trail

Located on the corners of Dobbs/King Street and Hyde Park Street.